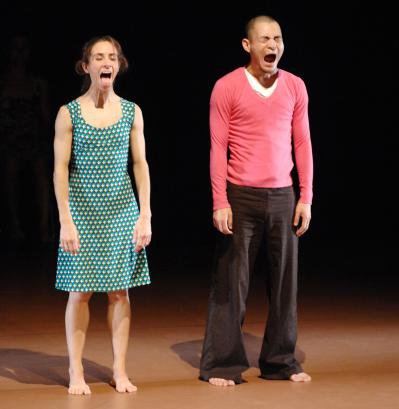 The subject of this project is the “foreignness of bodies”. We approach the subject matter from two directions. By “foreign” we mean, on the one hand, what is culturally foreign to us, i.e. bodies that we encounter whose movement patterns, presence and personality appear strange to us. We are attracted by them (the exotic) or we distance ourselves from them (fear of the other). On the other hand, “foreign” here also means us, our bodies, as bodies in a day and age in which there are billions of images of billions of bodies, and we are stuck in a huge “body press” (Jean-Luc Nancy), filled with significance, not knowing what actually that (still) is, our bodies?  Both approaches move toward one theory, as if they were moving toward the same point, toward the “body as the zero point of the world, the place where paths and space meet.” But, as Michel Foucault maintains, “the body itself is nowhere” (Michel Foucault, The Utopian Body).

SPECIFICS:
During our work in China we were confronted time and again with the phenomenon that what we understood as “bodies” – our body images, our understanding and our conception of subject and object, of utopia as it relates to the term body – differed in varying degrees from the conceptions of the Chinese dancers, choreographers and artists working with us. As a result, an Asian audience also “read” what is presented in dance performances – the movement of bodies, their communication on the stage – differently than a European audience. In spite of globalization, the clear cultural divide was revealed because body images and conceptions have deep cultural roots.The origins of body perception are very different when one compares European and Chinese tradition. Religion, science and philosophy play as much a role in that as geography, history, economics, forms of government, how power is exercised and notions about racial hierarchies. An example: in traditional Chinese medicine it was forbidden to cut open the body. Among other things, the reason had to do with the Taoist idea of humankind. Developed from that idea was an understanding of the body as a “closed vessel” with streams of energy, energy centers, and their balances and imbalances. From that understanding emerged, among other things, acupuncture as a method of healing the body through precise manipulation of energy streams in the body without cutting it open. Behind that is a powerful, holistic notion of body – energy – flow: every development moves in circular paths. In Europe, and as early as Greek antiquity, the body had begun to be dissected into its individual parts. The Enlightenment, rationalism, the growing separation of science and religion all sped up this penetration, dissection and fragmentation of the body in its essence, both theoretically and in practice, developing it in the extreme. A product of this development is dualistic thought in terms of mind and matter, body and soul: the paradigm of linearity. This type of characterization did not occur in China.

These are briefly outlined phenomena of different understandings of the body that have left a distinctive mark right down to the present and explain, from a cultural context, what the “foreignness” of bodies means.

Realization:
We want to decipher the “foreignness of bodies” with a group of three Chinese and three European dancers/choreographers.

The practical realization of the project will take place during several work processes in Berlin and Shanghai between April and September 2011. There will be public rehearsals in Shanghai and Berlin before the premiere in Berlin.