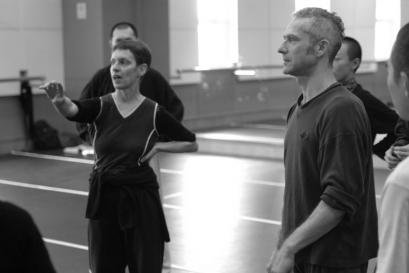 No matter how wide the spectrum of Rubato’s approximately 52 productions since its founding in 1985 may be, there are nevertheless certain recurring themes. Whether in Dieter Baumann’s solos, his duos with Jutta Hell, or the group pieces: the focus always lies on the hazards of humanity, insights into “normal” and nonetheless singular lives, the fragility of the individual, the search for its role in the community, solidarity, forlornness, social norms, interpersonal relations. “hunting” (2000) explores the pursuit of happiness and comfort, the gap between devotion and aggression, submission and dominance and the race for fulfilment. “Act” (2013) touches on similar motifs, but also includes political dimensions: change initiated by the power and unity of the people as in the Arab countries. Rivalry, competition, violence between the dancers show what comes next after victories have been won and power is distributed. While Bauman’s solos stand apart as reduced and highly concentrated questionings of the self in empty space, often in reaction to the work of Gerhard Bohner, the duets with Hell - associative visual tapestries composed of jigsaw pieces such as intimacy, ego, trust, tenderness – take stock of a shared journey and are, in their best moments, danced monologues of a dual body. Rubato’s work is finely chiselled with great wit in the abstract language of form, often ending on a conciliatory note. Over the decades, Rubato has become quieter, more sensitive, more insistent, more controlled in the use of movement and props.

Emotionality and formal rigour – Tanzcompagnie Rubato’s universe unfolds between these two poles. After almost 25 years of artistic practice, Jutta Hell and Dieter Baumann belong to the “doyen” of the independent German dance scene. Unimpressed by all short-lived trends, they continue on their own aesthetic paths. In contrast to younger colleagues, who mistrust movement as such and flee from all-too authentic emotions into irony, the two Rubatos display a seriousness and honesty that seems almost anachronistic.

Whether they use their bodies to trace their own personal losses or relationship issues, or approach the phenomena of space and time from a more abstract perspective – they always find a subtle balance between form and emotion, between narrative and abstraction.

Though both were, particularly in the beginning, influenced by their mentor Gerhard Bohner’s radical and often hermetic, disciplined form, they appear recently to seek to open “doors” of access to the audience. Based on an impressive physical memory that is written into their bodies, they develop experimental arrangements in which human beings appear as obstinate figures of movement in a field defined by the norms of society. Possible excesses occur only within clearly defined borders. As in Buddhist philosophy, contradictions are, for Rubato, not self-exclusive: they complement one another to create the image of a complete universe.